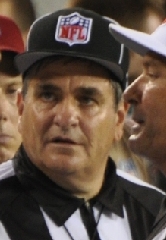 Served in a wide variety of assignments and police districts, to including assignments as an instructor at the Public Service Training Academy – In Service Training Section, instructing police veterans in current criminal law, procedures, and departmental policies; Special Assignment Team, a plainclothes unit responsible for the detection and interception of street level crime as it occurs; and Uniformed Patrol.

Responsible for the recruitment, training and retention of over 140 football officials across the USA; Chairman of the AIFA Standards Committee which implemented and/or enforced the league Code of Conduct as related to player behavior, as well as enforced administrative rules among team ownership; co-authored the League’s Rule Book.

Oversee all aspects of IFL officiating such as rosters, scheduling, travel, training and evaluation of league officials;  Liaison between the coaches and the league regarding all rule interpretations; Maintain communication with coaches regarding rules interpretations; Maintain communication with general managers regarding game day administration; Produce weekly training videos throughout the season; Developed league mechanics and authored the IFL Mechanics Manual; Partner with the National Football League (NFL) to assist in reviewing game film and mentoring of officials.

-Graduate of the International Association of Chiefs of Police Leadership in Police Organizations Institute;  a leadership development training program based upon a behavioral science approach to leading people, groups, change and organizations. The original course material was developed and taught for many years at the U.S. Military Academy at West Point. Through years of research and development, the curriculum was specifically tailored to meet the challenges and needs of the law enforcement community;

57 years old; married to Kathleen Bay; two children, Kristen (21) enrolled at University of New England where she is a double major in Marine Science and Bio-Physics as well as the Captain of the UNE volleyball team; and Jessica (19) enrolled at Embry-Riddle University where she majors in Aeronautical Science and a member of the Embry-Riddle volleyball team; Retired NFL/NCAA/Arena/High School Football Official – (30 years);

A: I won’t be pigeonholed into a spectrum; will govern by DO THE RIGHT THING which is the manner I policed the streets of MoCo for 30 years.

Q: What is the biggest challenge facing Montgomery County today?

A: The rising violent crime & gang violence occurring in this county. This is not the MoCo in which I was raised & it must change.

Q: What is the one thing – project or program – that you want to achieve?

A: Eliminate the traffic camera program which is a boondoggle benefitting the camera vendors while lining the pocket of Uncle Montgomery.

Q: How will you pay for your project/program?

A: No cost. Introduce a law to ban cams. As a cop for 30 years believe me they serve no purpose but to raise revenue for MoCo, another tax.